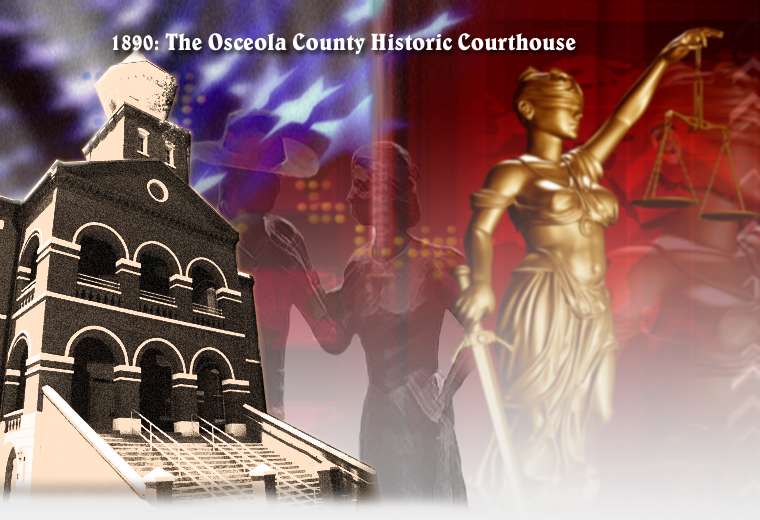 Dedicated on May 6, 1890, Osceola's historic red-brick courthouse has the honor of being the oldest courthouse in Florida that remains in use for judicial purposes. The courthouse had earlier, more rustic predecessors. In frontier times on the palmetto prairie in the 1870s, circuit-riding judges held court in a log cabin at a spot called Court House Pond, about four miles west of present-day Kenansville. This all took place well before Osceola County even existed.

The city of Kissimmee, which would become Osceola’s county seat, was first known as Allendale - named for J.H. Allen, a former Confederate soldier who moved to the area to become a steamboat captain on Lake Tohopekaliga. His boat, the Mary Belle, was the first cargo steamer on the Kissimmee River. Allen also opened a lumber mill and general store, which drew early settlers to his tiny settlement making it a center for commerce On March 23, 1883, voters incorporated the new town, adopting the name Kissimmee City. (The word Kissimmee is derived from the name of a riverside village of the Jororo tribe.) In 1887, after the state Legislature created Osceola County out of portions of Orange and Brevard, county commissioners ordered an election to choose the county seat on February 6, 1887. Kissimmee City was the big winner with 421 votes; the village of Runnymede (home to English settlers) was the runner-up with 30 votes. One vote was even cast for Hades by a town prankster.

Once the county seat was established, steamboat captain Allen offered his house as a temporary courthouse for the region. This only lasted for a short while however, as county commissioners soon signed a lease with the Brandow brothers to use their new opera house on Broadway. For $450 a year, the county used the opera house’s auditorium and stage for court sessions and the upper floor for county offices.

Commissioners then named a committee to find a permanent-courthouse site, and after much debate, the land on which Osceola’s Historic Courthouse now stands was purchased from the D. B. Stewart family in 1888 for $2,205.32.

In August 1888, commissioners accepted design plans by F. C. Johnson. A special referendum on March 23, 1889, authorized the sale of bonds to build the courthouse and jail. The results of that election were so close, with 193 yeas and 191 nays, that an opinion from the Attorney General's Office that the election had been conducted “free and open” was required before commissioners went ahead with the bond issue.

On June 3, 1889, a bid for $23,879 was received and accepted from the Pierce-Torrey Investment Company of Orlando, and courthouse construction began in July 1889. In January 1890, builders faced a temporary setback when a portion of the tower collapsed after the supporting timbers were removed, but the courthouse was completed by May 1890.

On May 6, 1890, the commissioners received the keys and formally accepted the new courthouse and jail, the final cost of which was $25,031.70. It became immediately apparent that something was missing: a fence to keep wandering livestock out of the halls of justice. Commissioners ordered the sheriff to keep all livestock out of the courthouse yard and to prevent riders from hitching their horses to the fence. Instead, several hitching posts would be added outside the fence to take care of the traffic.

As with any building, even a new one, the courthouse required maintenance, and records show that by 1892, cracks in the plaster walls were being patched. J. F. Willson was paid the then-extravagant sum of $21 to repair the tower and roof. In 1901, a county crew added electrical wiring to the jail, and the county paid its first electric-light bill of $1.64 on April 2, 1901. On March 3, 1902, the county’s first typewriter was bought for $175, and in January 1905, the Kissimmee Telephone Company installed the first telephone in the courthouse.

Tour of the Osceola Historic Courtroom