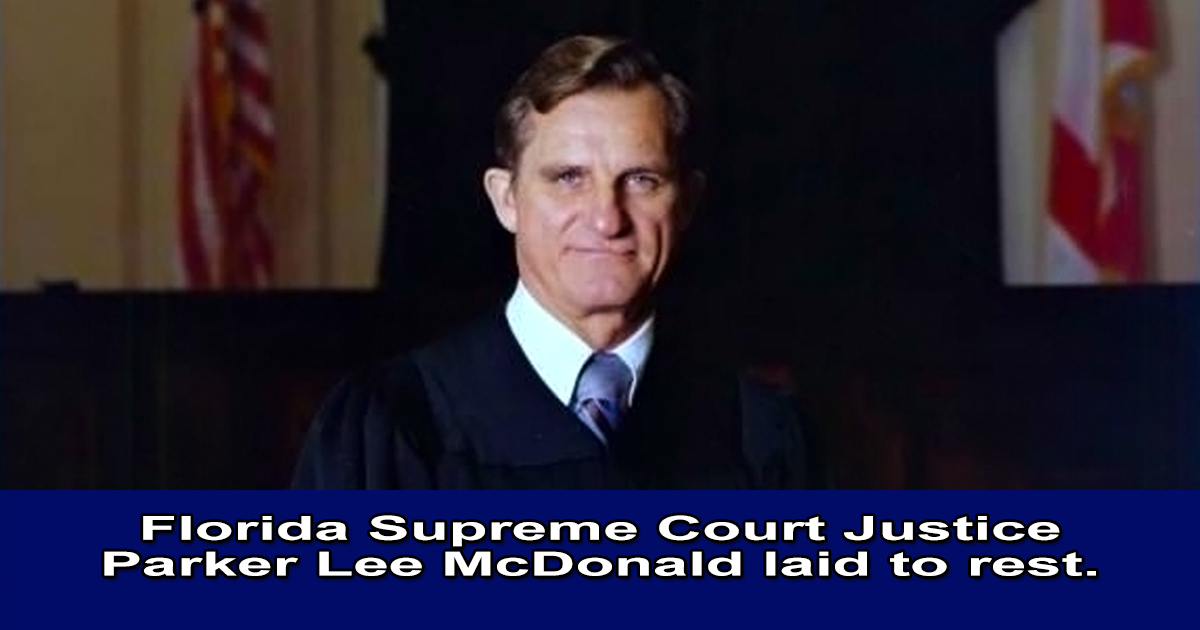 Justice Parker Lee McDonald
06/27/2017 © Tallahassee Democrat
Justice Parker Lee McDonald
Retired Florida Supreme Court Justice Parker Lee McDonald, 93, passed away Saturday, June 24, 2017, at his home in Tallahassee after a brief illness. At his passing he was surrounded by his wife of 67 years, Velma Ruth, and his children.
He was born in Sebring, FL on May 23, 1924 to Mattie Etheredge and Monroe Reid McDonald and grew up there during the Depression, when he helped support a struggling family by picking fruit and working in a grocery store. After graduation from high school in 1942, he enrolled at the University of Florida, but after one semester he joined the Army in World War II and served in the 20th Armored Division. He later stated that the Army life was good for him, in that through that experience he met, and lived with, men from all walks of life and from all parts of the country and that he "found that from the roughest hillbilly from West Virginia to the aristocrats from Philadelphia no man stands alone but all can bond together to accomplish a common goal. You learned to appreciate and depend on each other with the attendant knowledge that other people were depending on you. This is the way it is in life and I have always sought to carry my part of the bargain."
After the War he returned to Gainesville and graduated from the University of Florida with his law degree in 1950. Following graduation, he first practiced law in Sebring with his father, then joined the Orlando firm that became Gunter, McDonald and Handley.
He won an appointment in 1961 as a circuit court judge in Orlando. During his tenure as a circuit court judge, he was appointed at various times by special appointment to sit on each of the District Courts of Appeal. He was serving as chief judge of the Ninth Circuit Court in Orlando when Governor Bob Graham appointed him to the Florida Supreme Court in 1979. He served as chief justice for a two-year term in 1986-88 and retired from the court in 1994. During his 15 years on the state's highest court, he was known for his integrity and plain-spokenness, and quickly obtained the nickname the "Whistling Judge" for his habit of whistling in the Supreme Court building. Among his most significant opinions was one in 1984 that set a national precedent barring racial discrimination in the selection of jurors in criminal cases, which position was later adopted by the U.S. Supreme Court. He administered the Oath of Office to Governor Bob Martinez and to Governor Wayne Mixon.
It was during college that he met his wife during a weekend visit with his younger sister at Florida State College for Women in Tallahassee. They dated for three years, and in 1949, just after her graduation and six weeks before his, they married. It was timed so they could have a two-week vacation together at Christmas.
Born into a loving, Christian home, he remained active in his hometown United Methodist church his entire life. While in Orlando, he raised his family in The First United Methodist Church where he taught Sunday School and led the singing in the Men's Bible Class. Upon moving to Tallahassee in 1979 he became a member of Trinity United Methodist Church. He and his wife, Ruth, passed those values to his family. All of his children, grandchildren and great-grandchildren attend and participate in a church.
He is survived by his wife, Velma Ruth, his four children Martha Rebecca Morcom (Thomas Morcom), Bruce L. McDonald (Paula), Robert R. McDonald (Patricia), and Ruth Ann High (Robert K. High, Jr.), eight grandchildren David T. Morcom, Daniel P. Morcom (Sharon), Bruce L. McDonald, Jr. (Alisha), Mitchell C. McDonald (Meghan), Laura McDonald Dennis (Brett Dennis), Bryan P. McDonald, Jennifer High Cottingham (Craig Cottingham), and Robert K. High, III (Niki), and by three great grandchildren, Marisa Morcom, Maria Morcom, and Matilda Dennis. He was predeceased by two brothers, Monroe Etheredge and Donald Bruce, and is survived by his brother, Howard, and his sister, Martha Vail Pownall.
He will lie in State at the Florida Supreme Court on Thursday, June 29, from 11:00 a.m. - 1:00 p.m., when his family will receive visitors. A memorial service will be held at Trinity United Methodist Church, Tallahassee, Saturday, July 1, beginning at 11:00 a.m., with a reception to follow in Moor Hall. In lieu of flowers, the family requests that donations be made in his name to Trinity United Methodist Church, the Help Each Other fund, or to the Florida Supreme Court Historical Society.
Rocky Bevis of Bevis Funeral Home in Tallahassee (www.bevisfh.com) is assisting the McDonald family with their arrangements.

Justice McDonald was the last judge from the Ninth Judicial Circuit before Justice Alan Lawson, the Court’s most recent appointee, to serve on the Florida Supreme Court.