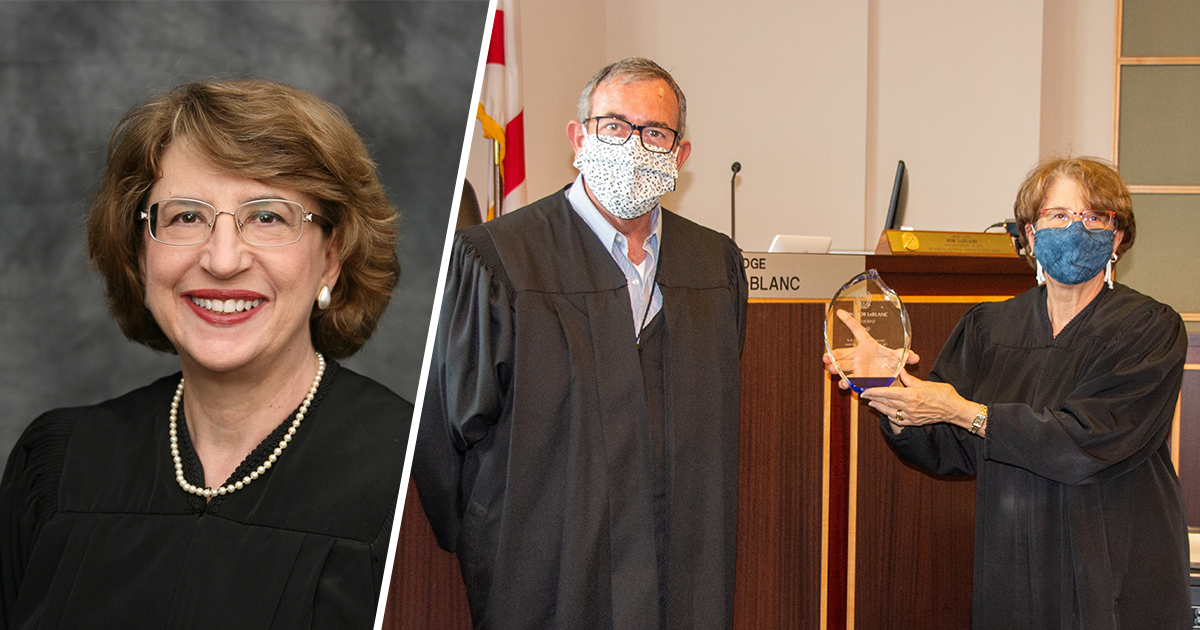 Judge Schreiber currently serves as the Associate Administrative Judge, Circuit Civil, in Osceola County. She was appointed to the Circuit bench in August of 2011, and continues to serve as a member of a number of professional organizations, including the OCBA, CFAWL, and HBACF. She was the inaugural recipient of the CFAWL Legacy Award for demonstrating the highest levels of integrity, leadership and service to CFAWL, the legal profession and the community in 2015, and served as President of CFAWL from 1993-1994. She is humbled and grateful for the honor of serving as President of the Inn.

Judge Schreiber’s first official action as President of the George C. Young American Inn of Court was to present the Inn’s outgoing President, Judge Bob LeBlanc, with an award recognizing Judge LeBlanc for his integrity, his professionalism, and his ethics by example. Judge LeBlanc received the award from Judge Schreiber at a socially distant ceremony on July 14, 2020. The award reads – “Hon. Bob LeBlanc, President, The George C. Young American Inn of Court. Thank you for your enthusiastic and dedicated leadership.2019-2020. Integrity, professionalism, ethics, civility and excellence.”

Judge LeBlanc has served as a Circuit Judge since 2007 and has been the recipient of numerous awards and honors, including the Outstanding Jurist Award (The Paul C. Perkins Bar Association, 2017), the William Hoeveler Judicial Professionalism Award (The Florida Bar Standing Committee on Professionalism, 2017), and the Glazebrook Memorial Bar Service Award for Professionalism (The Orange County Bar Association, 2015). During his year as President of the George C. Young American Inn of Court, he successfully met his goal of fostering “a sense of family by spending time together formally and informally.” He also ensured the Inn again was awarded the Achieving Excellence Platinum designation for the 2019-2020 Inn year.

Congratulations to both Judge Schreiber and Judge LeBlanc!