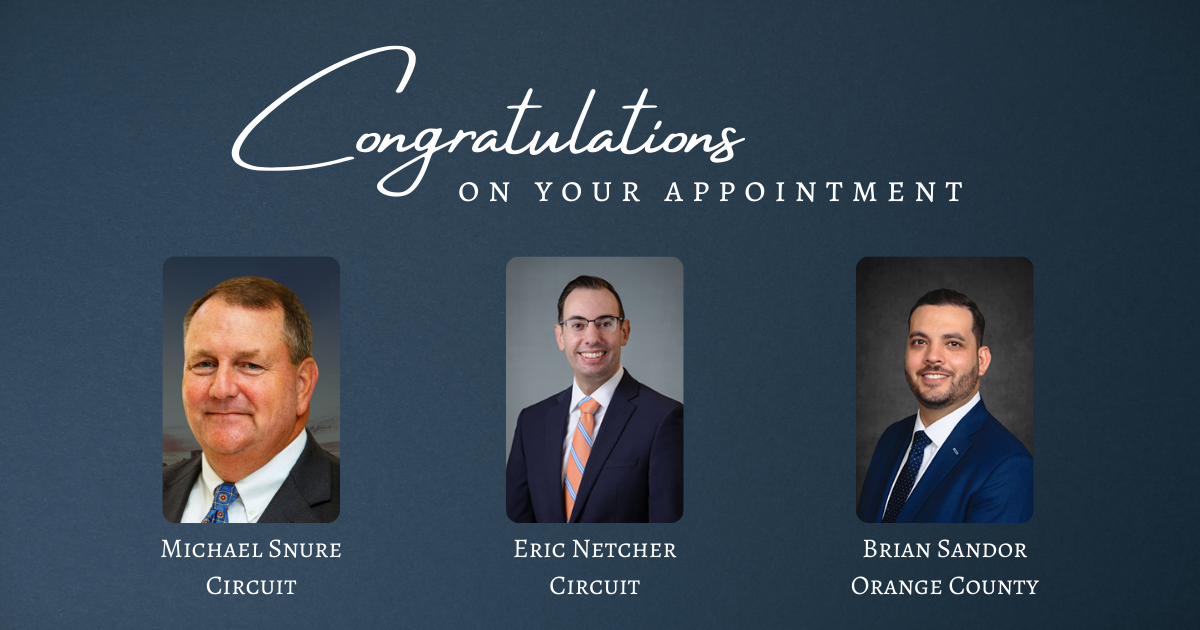 In honor of Constitution Day, Governor Ron DeSantis has made two judicial appointments to the Ninth Circuit bench and one appointment to the Orange County bench. Congratulations Michael Snure, Eric Netcher, and Brian Sandor on your appointments!

Since 2015, Michael Snure has served as owner of Michael J. Snure, P.A. Before starting his own practice, he served as an associate and partner with Kirkconnel, Lindsey, Snure, & Ponall, P.A. for 30 years. Snure received his bachelor’s degree from Lambuth College and his law degree from the University of Arkansas. He fills one of the new judicial vacancies on the Ninth Circuit bench created by the Florida Legislature.

Eric Netcher has been with Walker, Revels, Greninger, & Netcher, PLLC as a Shareholder since 2020. Between 2013 and 2014, he served as a judicial law clerk for U.S. District Court Judge David A. Faber. Netcher received both his bachelor’s and law degrees from the University of Florida. He fills one of the new judicial vacancies on the Ninth Circuit bench created by the Florida Legislature.

Since 2020, Brian Sandor has served as trial attorney for The Morgan Firm, P.A. He previously served as an assistant state attorney in the Fifth Judicial Circuit from 2011 until 2015. Sandor received his bachelor’s degree from the University of Central Florida and his law degree from Michigan State University. He fills the new judicial vacancy on the Orange County Court bench created by the Florida Legislature.