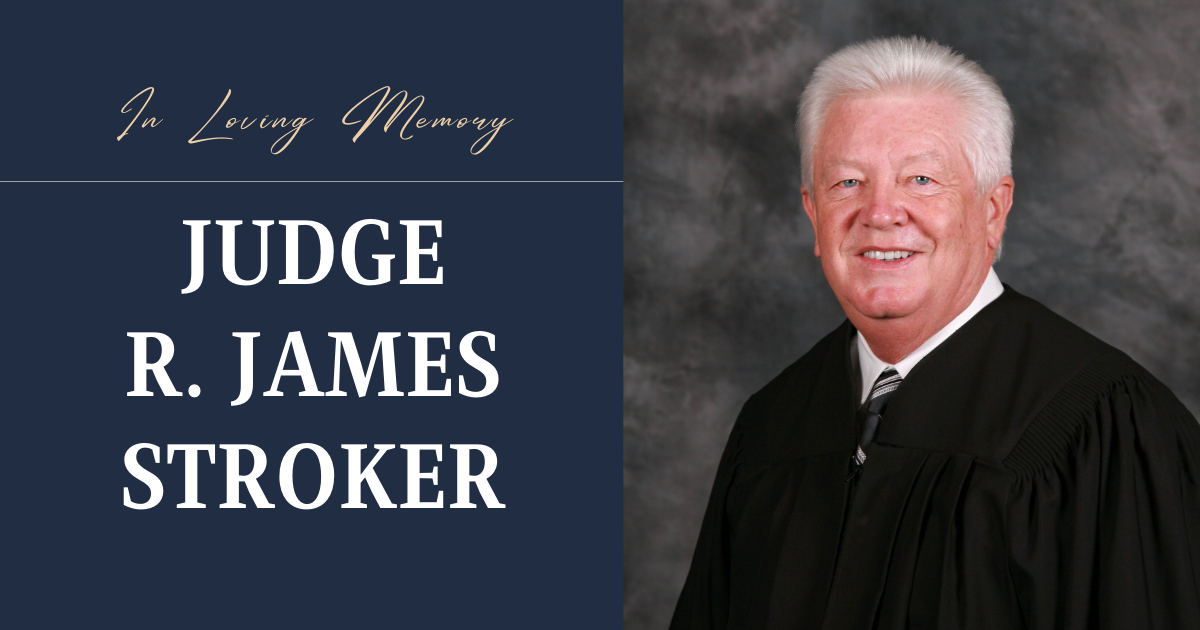 It is with great sadness that we announce the passing of Senior Judge R. James Stroker, who served as a judge from 1974 until his retirement in 2010 and as one of the Ninth’s chief judges from 1993 to 1995.

Born in Oshkosh, Wisconsin, few in his life expected Stroker to make his way down South to Florida. He attended Cornell University Law School and earned quite a few job offers in New York City by the time he graduated, but he had a different plan for himself. He packed up his Volkswagen Beetle and drove down to Orlando where he knew no one and struggled to find a job. However, Stroker was a man of determination and knew he wanted a position in labor law. He pitched himself to a receptionist one day, when notable attorney Tom Gurney, Sr. just happened to be listening in. After one meal together, Stroker had a job offer with Gurney, Gurney & Handley, where he began his career in law on the same day as Walt Disney World’s opening—October 1, 1971.

His work representing the insurance company for the City of Orlando after the opening of Walt Disney World brought Stroker the attention of city officials. They wanted him as the Orlando Municipal Judge, but Stroker didn’t think he was qualified for the position. He’d been practicing law less than three years at the time, but came to reconsider through the urging of the city officials. His career as a judge officially began in 1974, where he spent two years presiding over traffic infractions, misdemeanors, and city ordinance violations.

In 1976, the state of Florida phased out municipal courts in favor of a two-tier court system. Stroker was elected as a county court judge at this time. Later, in 1981, he ran unopposed for a seat on the circuit bench, beginning his time in the juvenile division. And in 1993, Stroker took the helm as Chief Judge for the Ninth Judicial Circuit where he tackled difficult issues in jail efficiencies and the court’s transition to emerging technologies. His time as Chief Judge guided our circuit into a new century.

Stroker ultimately decided to retire from the bench in 2010 after nearly four decades in the field of law and almost 37 years as a judge. However, his dedication to our circuit and the rule of law kept him busy in his retirement. For ten additional years, Stroker served our circuit as a Senior Judge, where he was an invaluable asset to our courts.

R. James Stroker leaves behind a legacy of dedication to justice. His presence leaves a lasting impression in our halls and we will never forget his time here in the Ninth Circuit. Please keep his family and friends in your thoughts and prayers at this time.

The Judge Jon B. Morgan Courthouse